The Aged Club Championships were completed on Sunday with Andrew Riminton and George Paul combining to win The Hylton Mace Trophy which is awarded for Mens combined 100 doubles.

Rob Muir/Fernando Alves and Stefan Fontes/Gavin Mcvean were the other pairs in the round robin.

On Saturday The Ladies 40 plus doubles was won by Krista Oates/Sarah Bunting who defeated Pam Muir and Liz Lim in the final.

The Mens 40 plus doubles was won by Richard Steeds/Steve Nettleton who defeated Geoff Dunstan/Fernando Alves in the final.

Thanks to all the players who entered and we all can look forward to Badge which begins on April 24.

The preliminary gradings will be released on March 5. 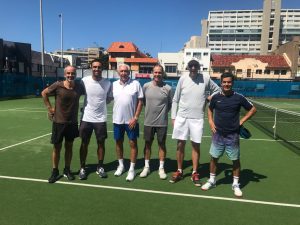 When will I get a COVID-19 vaccine? | Australian Government Department of H...
Scroll to top