Just a reminder that the beer and wine will increase by $1 from July 1.

Forget winter and embrace the Wimbledon spirit by joining us for a fun social tournament on Sat 9th July. Enjoy some strawberries & cream and a chance to play with some different people (outside your badge team!) in a mixed format doubles event. Please email Sarah on [email protected] if you’d like to play so we know if we have enough players to go ahead (weather permitting).

Round 8 of Sydney Badge was highlighted  last Saturday by the appearance of our new Prime Minister playing for Marrickville against our Manly Mens 6 Team.

Several State and Federal Police were in attendance as security for Mr. Albanese.

They were soon needed because in the first game Daniel hit Albo in the face with the ball.

The security were quick to ask to see Daniel’s passport and visa. Apparently they thought he might be a right wing terrorist sent from Brazil. After a brief break Albo bravely played on only to lose both sets to Daniel and Ben.

During the next two sets against Lachlan and Brett,  Albo was heckled by a Club member. The Police were quick to react again and the member was escorted back to the clubhouse.

Albo and his partner were defeated in these two sets also. Despite these setbacks Albo was happy to pose for selfies with club members and stayed for a beer and sandwiches. I believe Zali Steggal tried to see Albo also regarding her staff cuts but was ushered away by the Police. 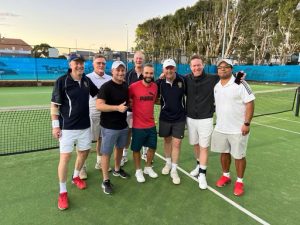 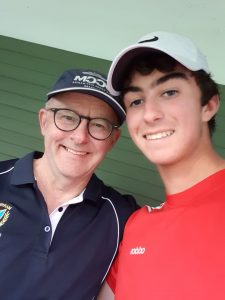 Before the match began Sean told Boyd and Bosco that he and Cameron would win 4 sets so all they had to get was a 6 gamer! Boyd and Bosco achieved 6 games but unfortunately in 4 sets and not 1 set as needed.

Division 1 is so strong this year that games are very important as most matches are very close results.

Another great win to now be safely in the top 4 after being last after a few rounds.

Coaching Comes Out of the Shadows